The Liberal government has introduced legislation to provide workers in federally regulated sectors with 10 days of sick pay — while also making it an offence to intimidate or prevent patients from seeking care, or to interfere with health professionals trying to deliver it.

O’Regan said the pandemic showed how a lack of sick days left many workers at risk. He said that now is the “time to close the gap that the pandemic exposed in our social safety net.”

According to government officials speaking on background, about 950,000 people work in the federally regulated private sector. About 583,000 of those workers have less than ten days of paid sick leave and would stand to benefit from the legislation.

O’Regan said that while the federally regulated workforce makes up only about five per cent of workers in Canada, the law could set a standard for provinces to follow.

“We know that the only way we are going to get through this pandemic is [that] when people are sick … they stay at home and [don’t have to be] afraid about losing compensation,” Unifor’s national president Jerry Dias said Friday. 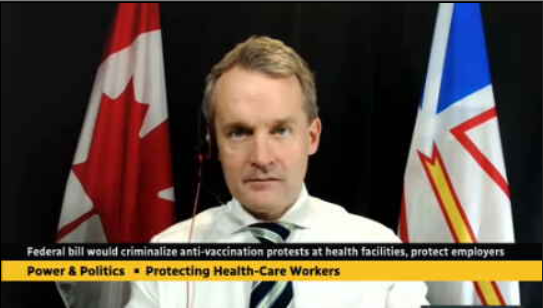 Minister of Labour Seamus O’Regan joins Power and Politics to talk about a new federal bill that aims to protect health-care workers and that calls for 10 paid sick days for federally regulated workers. 6:43

NDP Leader Jagmeet Singh, who had been calling on the federal government to make this change throughout the pandemic, welcomed the announcement.

“Today’s announcement is very long overdue. Justin Trudeau owes frontline workers an explanation about why he couldn’t help them when they needed this over a year ago,” Singh said in a media statement.

Lametti said the pandemic also revealed the abuse and intimidation inflicted on health-care professionals and patients at vaccination centres, abortion clinics and hospitals.

Protests against vaccine mandates and other COVID-19-related public health measures held outside hospitals in September were condemned by politicians and health-care organizations as unacceptable and unfair to staff and patients.

The changes to the Criminal Code create two new offences meant to protect patients and health-care workers from abuse.

Those convicted of either offence could face up to 10 years in prison.

Lametti said the government is also drafting new sentencing provisions that will require courts to consider serious penalties for anyone targeting a health-care provider at work.

Lametti said he’s disappointed that such a law is necessary.

“Even this week, COVID deniers were trying to stop children from receiving vaccinations,” he said. “Every day, health-care workers are coming forward and speaking out. They are exhausted, they are discouraged and they are fearful, and the sad reality is that these sorts of threats predate the pandemic.”

Linda Silas is president of the Canadian Federation of Nurses Unions, which represents some 200,000 nurses across the country. She welcomed the announcement, calling it a first step in recognizing the threats facing health-care workers.

Lametti said he hopes Bill C-3 moves swiftly through Parliament. Silas said she wants to see all federal parties jump behind the initiative.

“In the previous Parliament both the NDP and the Conservatives proposed private members bills to do something similar here,” Silas said. “So I would be stunned and very disappointed if there’s not unanimous consensus to protect health-care workers.”

In an interview airing Saturday, criminal defence lawyer Ian Runkle told Chris Hall, host of CBC Radio’s The House, that it’s already a criminal offence to block access to a hospital. He said that if those cases are not being prosecuted, it’s because of a lack of will, not a lack of legal authority.

“Police have more than enough tools in their toolbox here in terms of offences like mischief, which makes it an offence to obstruct, interrupt or interfere with the lawful use, enjoyment or operation of property,” Rundle said. “That covers blocking off infrastructure.”