Crowds of people opposed to COVID-19 vaccinations clogged the streets of Vancouver and demonstrated outside hospitals across B.C. on Wednesday afternoon, earning the indignation of some political leaders.

According to police estimates, thousands of demonstrators gathered outside hospitals in Vancouver, Kelowna, Kamloops, Victoria, Prince George, Nanaimo and in other Canadian cities.

The protests were organized by Canadian Frontline Nurses, a group founded by two Ontario nurses who have promoted conspiracy theories about COVID-19 and attended rallies in the U.S. for those who think the pandemic is a “fraud.” In posters for the event, dubbed “worldwide walkout,” the group urged supporters to “stand up for freedom” and “reject the tyranny of mandatory vaccines.”

Protesters carried signs with slogans criticizing vaccine passports as a form of discrimination and chanted “freedom” and “crimes against humanity.”

By the early evening, one health authority was reporting a physical assault against a health-care worker. Island Health’s president and CEO Kathy MacNeil said some of the protests on Vancouver Island had disrupted people’s safe access to health care.

“Members of Island Health care teams were verbally abused as they came to and left work during these protests, and in at least one case, a health-care team member was physically assaulted,” MacNeil said in a written statement.

“The nature of the protest to disrupt people when they go to hospital, people who are going there for surgery or for other circumstances, or to visit loved ones or to be with loved ones when they pass away, to have a protest there is really not acceptable behaviour,” he said.

Health critic and Liberal MLA Renee Merrifield agreed. She said she understands the frustration people are feeling, but said there are better ways to be heard.

“It was the wrong place and the wrong time,” she said.

In Kamloops, on the other hand, a man was arrested on suspicion of assault with a weapon for allegedly throwing multiple eggs at protesters, according to RCMP.

Premier John Horgan called out what he described as “harassment” of health-care workers during the protests.

No Canadian government has made COVID-19 vaccines mandatory for the general public, though B.C. has announced immunization will be required for health-care workers in long-term care homes.

Some provinces, including B.C., are requiring proof of vaccination for certain non-essential activities while many employers are requiring vaccines for people returning to the office.

Those who spoke with reporters at various B.C. rallies represented a range of interests. There were familiar faces who’ve protested against COVID-related restrictions since the beginning of the pandemic, as well as others who said they were motivated to attend a rally for the first time because of B.C.’s new vaccine card.

Vancouver emergency physician Navdeep Grewal said scenes from the protests had brought her to the verge of tears. She described them as deeply demeaning and disrespectful to the people working inside the hospitals.

“The lives of the people with COVID infections that they’re saving right now are those that are unvaccinated,” she said.

The largest protest was in Vancouver, where demonstrators gathered outside Vancouver General Hospital before marching toward city hall, but Vancouver Coastal Health reported that there were no disruptions to the hospital’s operations or patient care.

By 3 p.m., police estimated that as many as 5,000 people were blocking traffic at the intersection of Cambie Street and 12th Avenue.

Mayor Kennedy Stewart described the protesters as “kooks,” “fringe lunatics” and “a bunch of jerks” in an interview with CBC News and said they were rubbing salt in the wounds of exhausted front-line workers.

“They should stay the hell home and stop doing this,” he said.

In downtown Vancouver, many in the majority white crowd carried signs comparing themselves to historic victims of genocide and other forms of violent racial and ethnic discrimination.

One sign read “Choice=Freedom | Mandate=Slavery” while others invoked “medical apartheid,” the Holocaust and the Nuremberg Code, a set of ethical guidelines governing medical experimentation introduced in response to Nazi atrocities. 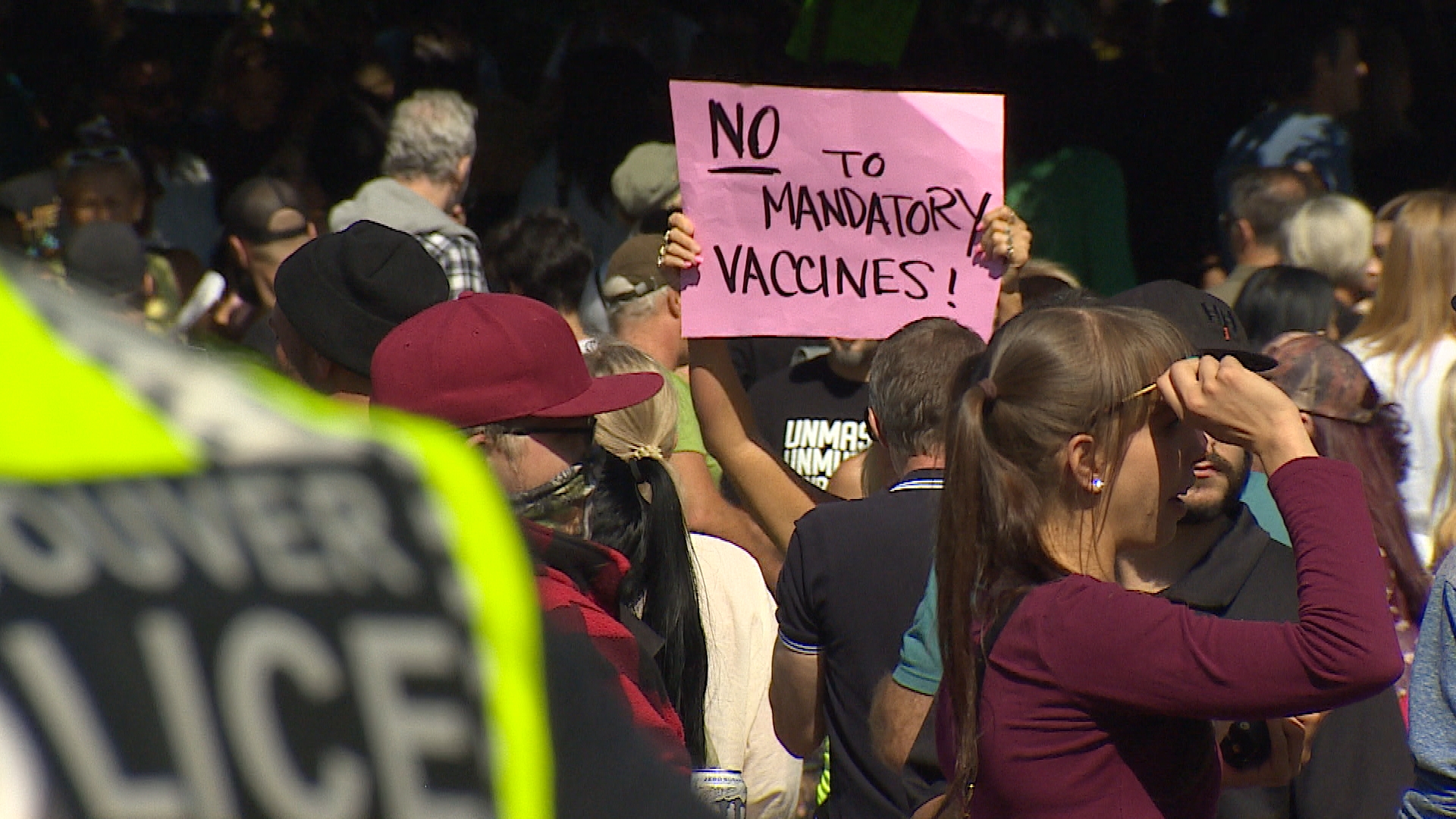 Similar rallies took place outside hospitals in other cities across B.C. 0:49

Greg Tanner told CBC News that neither he nor his wife, who works in assisted living, will get the COVID-19 vaccine, because “you give an inch, they take a mile.”

Angela D’Agostino said she has no intention of getting the shot and found the current push for vaccination “scary.”

“If we give up any of our rights now, we’ll basically have no control over life,” she said.

In Kelowna, about 1,000 people assembled outside Kelowna General Hospital.

Raena Birch said it was her first time attending a protest of any kind, but she was motivated to rally for freedom of choice.

“I don’t think it’s anyone else’s business what I do medically,” she said.

Some photos from the anti-vaccine passport rally outside Kelowna General Hospital this afternoon. Estimating ~1000ppl. There are some familiar faces from the Kelowna anti-mask rallies, but some ppl who said this was the first time they came out to something like this. <a href=”https://t.co/PtMqbv3NbF”>pic.twitter.com/PtMqbv3NbF</a>